Already with the release of her first solo album I’ll be Anything, Shayna Steele became a recognized solo artist. LA clubs fought for her performances, while San Francisco, New York, Milan, Rome, and Zurich welcomed her with overcrowded concert halls and a loyal fan base. Ten years after her first solo album, the owner of this strong vocal is called the American jazz diva, one of the brightest singing sensations of our time. A charismatic, charming and truly unique voice with the power of a volcanic eruption, outstanding vocal technique, and composing skills. Collaborating with the pop star Rihanna and American electronic music legend Moby, she recorded another bright solo album Rise. The singer's vocal has been featured in the most popular US TV shows, movies, such as "Sex and the City 2", the HBO series "The Sopranos", and the Grammy Award Ceremony.

Shayna is currently finishing up her 4th album and continues to play solo concerts throughout the world with her quartet, symphony orchestras (Rochester Symphony, Detroit Symphony, Dallas Symphony) and Jazz Big Band Orchestras. At the concert in Liepaja, she will continue collaboration with the professional and artistic Latvian Radio Big Band that started in 2017. The programme includes Steele's original pieces, as well as popular jazz, blues andsoulful melodies. 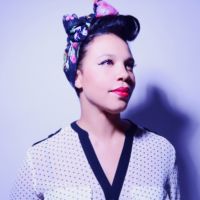